PV Dias was born in Belém do Pará and now lives in Rio de Janeiro. The artist has a degree in Social Communication, a Masters in Social Sciences at the Federal Rural University of Rio de Janeiro and a degree from the Parque Lage Visual Arts School, in the 2019 Formation and Deformation program.

His research deals with the structuring of images of a territory and possible erasures in this structuring. Along this front, a work is also started on interventions in colonial violence in the places where the artist travels, capturing records about places that are divided between the Amazon and the southeast of Brazil.

The artist works with painting, photography, video and digital art platforms. His work is in the Collections of the Rio Art Museum – RJ, Casa Niemeyer – UNB and Museu D’Água – PA.

PV presents us with an electrical discharge over the body, in colors and rapid and hallucinating movements, but governed by the movements of bodies in the Amazonian heat. At a time when Instagram filters can be applied everywhere, Dias transports the Amazonian atmosphere, through digital codes, to any place in the world.

Dias presents realities that conflict with an imaginary fruit of common sense imbued with exoticisms and foreignisms. These stereotypes generally perpetuate a reading of the Amazon as a wilderness, always on the periphery of modernity. The artist presents ways of thinking about a digital Amazon, in which flows are dictated by both rivers and the virtual cloud.

PV Dias is an artist from Pará who lives between Rio de Janeiro and Pará, researching the ways in which the images of a territory are structured and the possible ways of erasing, altering or mending these structures. Born in Belém, in 1994, the artist proposes, through painting, photography and digital arts, dynamics to reoperate artistic canons and historiographical and social vices. Dias presents realities that conflict with an imaginary fruit of common sense imbued with exoticisms and foreignisms. These stereotypes generally perpetuate a reading of the Amazon as a wilderness, always on the periphery of modernity.

The artist presents ways of thinking about a digital Amazon, in which flows are dictated by both rivers and the virtual cloud. Dias brings together broad reflections dear to contemporary art, such as discussions on ‘local’ and ‘global’ art and ‘popular’ and ‘erudite’ systems of thought, to the decolonialist revisitation of narratives and historiographies, cultural hybridisms and the NFT market. His artistic practice takes place on multiple platforms, such as painting, photography, digital interventions, videos and animations.

In fact, the Amazon is oblivious to some phenomena that happen in other centers of Brazil – in the artistic milieu, for example, dominated by the Brazilian Southeast region –, but this bifurcates into two contrasting matrices. This distance, at times, is more acute, making aesthetic systems, habits and the connection with their roots work as stronger links. On the one hand, the Amazon portrayed by PV Dias carries characteristics very close to the traditions of the native peoples – riverside and indigenous peoples – such as the use of hammocks for resting, regional dances as a festive expression, and wooden boats on muddy waters of the rivers that flow into the Guajará Bay. Being distant, in this case, is not obsolescence, but a blessing that allows the preservation of strong original cultural aspects – a resistance that has been gradually more arduous. On the other hand, in a second bias, the artist reiterates the complex cultural hybridism in which this distance is smaller than imagined: he presents the tecnobrega sound system parties, with lights, projectors and other digital mechanisms, and the neon colors as constituents of a regional aesthetic system, used by Dias both in the clothes of his portrayed and in the visual patterns themselves, as well as in the painting of regional houses of vernacular architecture.

Graduated in Social Communication, Master in Social Sciences at UFRRJ, and trained at the Escola de Artes Visuais do Parque Lage, in Rio de Janeiro, Dias uses contemporary technologies to revisit these narratives and present images and artistic expressions that are very unexpected to those who do not know in fact the cultural complexity of the Amazon. The artist integrates, transdisciplinary, fresh and very effective technologies, from the scope of human sciences to computer science: it can be understood that the theoretical and methodological apparatus for a historiographical review in contemporary times is as sophisticated as image editing software, augmented reality and artificial intelligence meticulously manipulated by Dias.

In addition to having participated in several group exhibitions and having held his first individual exhibition, entitled “Desarmonia”, in Rio de Janeiro, in 2021, Dias has worked with relevant artistic institutions and communication vehicles, such as the electronic magazine VICE, the magazine Cult, the Goethe Institute, the Museum of Modern Art of Rio de Janeiro (MAM-RJ), Parque Lage and the New York institute Creative Time. His works are part of the permanent collections of important artistic institutions, such as the Museu de Arte do Rio (MAR), Casa Niemeyer (UNB) and Museu d’Água (PA).

In addition to cultural and aesthetic aspects, Dias builds, in his works, a discourse that combats the usual social structures of repression, especially about the invisibility of black people in the broad narratives of art histories – who, when represented, usually figured in positions of inferiority. In the series “Rasurando Fidanza”, Dias takes up the works of Portuguese photographer Filipe Augusto Fidanza (1847-1903), considered one of the main exponents of Brazilian photography in the transition between the 19th and 20th centuries. Reiterating racist structures, from a foreign perspective, Fidanza produced vast series of what were considered “ethnic photographs”, depicting black people at work. This is a reflection, in modernity, of the strong economic explosion that Belém experienced in the 17th century, with Portuguese colonization, which was also fueled by the same racist and xenophobic matrix. Dias revisits these photographs, erasing both the photographer’s name and the objects that the people portrayed carry, replacing them with digital cameras, drones and lighting devices. The artist rewrites these scenes, listing those portrayed no longer as objects of a foreign gaze, always linked to the hard work of manual labor, but as artists who command contemporary photographic devices and who write new stories and build their own visual narratives. The camera is now in the hands of the black Amazonian.

These striking elements of contemporaneity in the work of PV Dias are materialized in the artistic production of the young hyperconnected artist. Drones, cameras, neon colors, speakers and cell phones are not seen with strangeness or detachment, but they are very common in the collective narratives of the Amazon today. The artist largely dominates digital platforms, with augmented reality filters pumped out on Instagram and a new collection of NFTs produced by Dias on one of the world’s leading crypto-art trading platforms.

After all, how do such different universes collide? What is the result of the collision of a structure of thought based on numbers, modules and quantitative answers with a thinking arranged according to the flow and curve of the rivers, to the organic rhythm of the forest, to the rain every afternoon? PV presents us with an electrical discharge over the body, in colors and rapid and hallucinating movements, but governed by the movements of bodies in the Amazonian heat. At a time when Instagram filters can be applied everywhere, Dias transports the Amazonian atmosphere, through digital codes, to any place in the world. 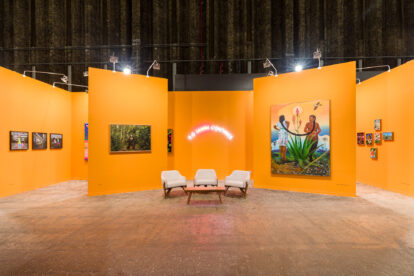 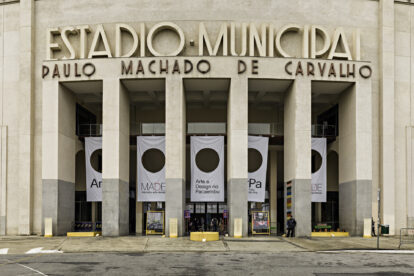